In every group of people having a conversation, there is always one oversabi (Miss Gidi 2014) . In case you didn’t know, an oversabi is a person who feels the need to act like they know it all, so it’s no surprise that they are also called ‘I too know’, ‘ITK’ or ‘know it all’ if you choose to go the posh way. What’s annoying about oversabis is that true to their titles they assume to know everything even in situations where they obviously have no experience. 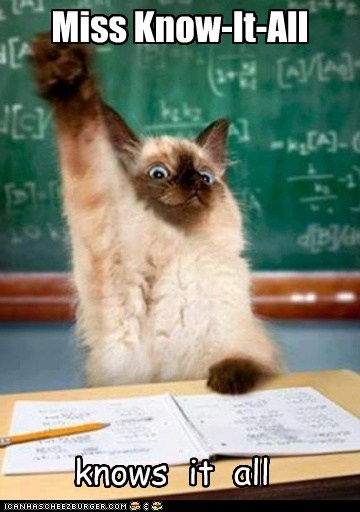 Over the weekend, I ‘somehow’ found myself in a group of older ladies having a conversation on being career wives and mothers; the ‘somehow’ part is that I went to a different salon from my usual and soon realised that the top customers in this salon happened to be married women which is very different from what I am used to but that’s not the point of this post. I listened to them talk about having kids, taking care of the home and also finding time to look hot because there is competition that they have to keep up with a.k.a hungry single women. What amazed me though was one lady who had an opinion and unsolicited advice for every topic raised.

I listened to her tell the other ladies how to treat their husbands, splitting home chores, training children the right way and at some point,  she was advising a woman who had been married for 30 years on how to handle her marital home. As in, O ghel was vast in this field and was dishing out free advice that no one asked for; the only problem was she had no wedding ring on, and when asked how long she had been married, she admitted that she was still single,(never been married) and had no children. At that point, all the younger married women zoned out while she spoke and turned to the older woman on tips on how to handle a home and bring up children; after all she had been married for 30 years with children in their twenties while they still struggled with managing their toddlers. It was clear Madam Oversabi did not fit in.

It’s no news that single (and divorced) people often offer the best unsolicited advice and/or opinions  most times based on theories and observation. For example, the book ‘Act like a lady, think like a man’ became a hit with every woman using it as the bible for their relationships without questioning the authenticity of the author, who’s been married three times but what is my own there, the man is smiling to the bank while I’m looking for small change and using him as a bad example. Anyway, I felt bad for lil Miss Oversabi as she was side-lined in the conversation due to her inexperience and it made it clear to me that sometimes single ladies (and some guys) cross the line when advising those who have problems very different from ours.

While you are struggling with just having a date or that guy that picking up your 15th call in the last 15 hours, the married woman next to you is worrying about her husband or her son that is determined to be a spoilt brat. Regardless of how many theories you know or the number of families you may have observed, it is and will never be the same when you have not gone through that experience or currently in a place to understand it. Call it harsh but Miss Oversabi deserved that treatment ..I only felt bad for her because being single like she is, I understand the pain she felt not because I thought she was right.

No one is saying giving advise is wrong, but giving unsolicited advise and acting like you know it all especially on dynamic matters such as marriage and raising children can be  presumptuous . So to all the single ladies out there, when faced with a conversation by a bunch of married women, do not under any circumstance (even if all your siblings are married) become Madam Oversabi.