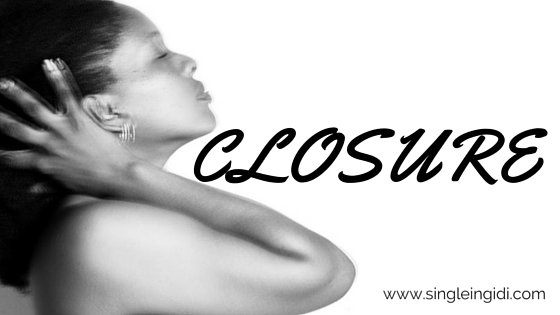 Hello, it’s me
I was wondering if after all these years you’d like to meet
To go over everything
They say that time’s supposed to heal ya, but I ain’t done much healing

Am I the only who is obsessed with Adele’s new song, by the way, who else has seen Joe’s cover? Adele killed this song, but Joe straight-up murdered the cover. In case anyone of my billionaire friends wants to give me a wedding present, I can accept Joe serenading us.. *wink wink*
Amazing that five years later, Adele is back like she never left. I love how she is so relatable to anyone who has had their hearts broken, but this song took me back memory lane, and how sometimes we put our moving on from hurt and finding closure into the hands of the other person.

Recently, a friend and I were having a conversation on finding or getting your closure from relationships gone sour. I was of the opinion that after a breakup, the best thing to do would be to move on while she believes in order to move on you had to have an honest conversation with the other person so you could have peace.

But what happens if the other person does not want to have a conversation with you though?

Let’s be honest, breakups aren’t easy but what makes it worse is when there are questions unanswered leaving behind a void that needs to be filled with explanations or some form of validation (NO, this is not where you start quoting the bible)

Often times, we tend to believe our closure is found from just saying ‘this relationship is not working’ until something happens and a million and one emotions come flowing down all over again. I remember waking up one morning and seeing pictures of my ex on Facebook in a suit and a woman in a wedding dress, I refused to admit he got married, yes, he was a jerk to me and yes I knew we would never get married but if we only broke up in December, how was he married in July? I told myself I needed closure as a matter of fact, I deserved the closure so I sent one of those guilt trip emails hoping he would respond (why do women do this?)

Broda did not respond, as a matter of fact, he went as far as blocking me on Facebook and every social media platform he could find me so I would not be able to reach him to ask him questions because he knew I had them; questions like who was she? when? how? why did you treat me as bad as you did? do you know how many times you made me cry? how dare you deserve to be happy? what lies have you told her about me, because I know you lie? how come this girl is so blind to see what a jerk you are? e.t.c

When I look back now at those days, I laugh, because at that point in my life I believed my closure had to do with the other person more than it had to do with me like my friend does now.

One of the mistakes we often make is putting the course of our lives in the hands of someone else in search of some form of validation like our happiness depends on their existence  so when that source of happiness disappears, we become devastated and somewhat distraught and go about searching for that closure, wanting to hear the answers from someone else  even though we may already know them.

Why on earth we do this instead of  “closing the door” ourselves is something I can never really quite understand. When I told my friend that I learnt to walk away and never look back, she looked at me like I must have lost my mind because for her she would have gotten to the bottom of the gist whether the dude liked it or not….(babes sha)

Truth is, whether or not we were the ones to end the relationship, we have to admit that it ended for a reason and often times we do have a part to play in it. It is important to think through all the possible reasons. Finding closure doesn’t mean you need to become best friends with your ex;   it just means he or she is no longer your enemy and you are fine with whatever decision they made with their lives because your happiness does not depend on them.

No matter what situation you’ve gone through, realize that no one gives you the permission to “move on”. So learn to give yourself closure and move on with or without other people, or you could remain stuck in the past for the rest of your life while the other party enjoys their lives without you.