Are you 30 years of age or over? Would you like an evening of fun, Jazz music, having your favourite wine and of course a good conversation with other mature singles like yourself?

It is going to be an evening of fun, games, therapeutic sessions and of course mingling. There are only 30 slots available (15 of each gender) and the event is absolutely FREE.

If you would like to be a part of it, simply register below. Potential participants will be verified to ensure that information provided is genuine before further details are communicated.

Please note, you have to be registered before you can attend.

For further inquiry, email events@singleingidi.com or follow us on twitter; we would love to answer any questions you may have.

There comes a time in life when you want to ‘settle down’. I mean in a society like ours, that’s your singular purpose in life from the moment you could introduce yourself without the help of an older person *insert sarcasm*.

This ‘want’ and ‘need’ to be married soon becomes an ailment, a disease that follows you, a condition that makes your friends avoid you, a sickness that makes every relationship short-lived and potential friends become strangers.  The problem is that in all of this, the only person who is not aware of the severe Desperado Syndrome is you and when you are told that you’ve become that desperate single person, you often go into defense mode and then have this long speech to back up your points.

Here are a few ways to know if you have become that desperate single person:

I know sometimes, it seems like trying hard will give you a more likely chance of find love but everyone needs to know where to draw the line and not be desperate. You can probably think of a time when you met someone who reeked of desperation, at first it was cute but then you freaked out and ran as fast as you could.

I can hear you saying, “I don’t act desperate, okay.  I just want to settle down” and that is probably true.  I’m sure you are not the female version of who I just described but it doesn’t mean that you aren’t putting off that same kind of vibe.

On Thursday, Zoe Chinaka of Nigeria Info invited me to join a panel of ladies as we discussed how to mingle this holiday. The other ladies on the panel were, TG of Protouch Consulting and Mrs Tolu Akintoye, a relationship counselor. I must say it was fun having to share notes and thoughts with the ladies on air.

As we are in December, we all know that LasGidi is going to be busy with a lot of events and of course our family and friends will be coming in from far and wide to celebrate the holidays.

December is also known as the time that a lot of singles get to mingle, and maybe meet potential ‘partners’ or just make new friends. Whatever the case, there will be a lot of activity and the ladies and I were able to come up with a few good tips on how to mingle as a single lady this holiday.

And that’s it, 5 mingle tips for the singles in Gidi this holiday. Do you think we missed something? Leave a comment below and tell us how you mingle?

On that note, don’t forget another chance to mingle this holiday, #SINGLEINGIDI will still be on stage for today only at TerraKulture, Victoria Island for 3pm (N3,000) and the command performance at 6pm (N5,000). Yesterday was fun, you don’t want to miss it today 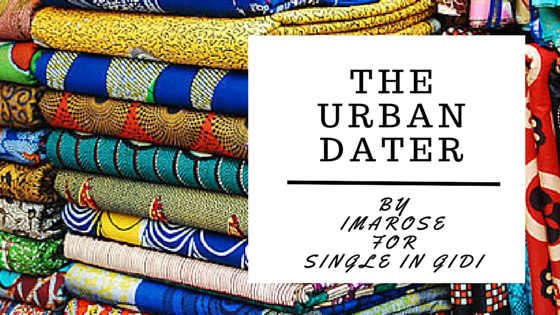 Single and very open to mingle? Yes! Single and willing to go with the flow or stuck in an emotional rut? No!! thanks. What I want is something meaningful. I want a man who is ready and willing to share his life as I am. Not making sense? Let me explain.

Most single people like me are all looking for that “happily ever after”, we all have in our heads an ideal about what our complete package should be and look like, but wahala dey; these days’ relationships aren’t defined the same way as they used to. Recently, my friend, on trying to defend his commitment phobia said “Ima, it’s so hard for us guys to commit these days, girls full everywhere and are too available, and so we don’t even know where to start from”. In other words, our generation has found new ways to accommodate the complexities of the new age-living; the alternative lifestyle by accepting the convenient in the midst of the available.

Last year, I was driving my mother’s car when some guy hit me and broke one of my lights. I didn’t know when I blocked him and ran out of the car to yell at him, maybe my confidence came from knowing I could easily call for help if he wanted to beat me up because I was close to my office… Lagos drivers can bring out the worst in someone sha. As I was yelling and beckoning the guy to come down, another guy parks and comes out to calm me down and find out what happened. I knew the guy that hit me won’t buy the headlight, but I wasn’t going to spend that kind of money without making trouble, hiss. So that was how I met Mr F.

Mr. F, was FINE  but too buff for my liking, most girls like buff guys with defined arms, six-packed hard as rock and all, but buff built is not my cup of tea. I find it scary and cannot imagine all of that on top of my small frame. Anyway, his chocolate skin, height and correct set of dentition more than made up for it. Mr F was intelligent. As a sure Lagos boy, he smooth-talked the hell out of me, wined and dined me, once took me to his church, attended his friend’s wedding with him, but in my mind I was like “he is probably doing this with like 3 other chics, so I didn’t even bother reading meanings to it. I mean look at our own Bobo Nkiti, steadily running a consistent game with Cynthia, Rolayo and Keme. Until a man has laid his cards on the table, I don’t read meanings to anything.

After like three months, I, of course wanted to know what Mr F wanted to do with me, as he was taking too much of my time and not allowing me focus on being available for other guys. I am the type of woman who will tell a man the truth if I am hanging out with other guys if the question arises. This was up and running for like three months, I needed to know if I should like him or  keep my options open.

I preferred having this conversation in person, so we had arrange to meet up for dinner after work, we went to Yellow Chilli and ordered our favourite starter and by the time the main course came, I had no space let. One of the things I really liked about Mr F was that he didn’t have an issue with me dipping into his plate, like most guys do so we would often order different dishes and share with one another…romantic too

After climaxing on seafood okro and garri, Mr F asked “you wanted to talk about something?”. I almost changed my mind about bringing up the topic, because, I knew such conversations, could mean the end of a friendship, and I liked his company a lot.

So I started off the conversation with such hesitancy but eventually, got it out. “I think you are a great guy, I like hanging out with you, enjoy your company, we hang out a lot, in last three months, you have become a big part of my routine and I will like to know, what you want us to do, and I want you to be honest with yourself, what are your plans and what do you want to do”?

As expected Mr F froze for a bit, fiddled with my hair and then goes “you are a great girl, I like you a lot but to be very honest, I initially had no definite plans but I don’t want to lie to you, so please give me a couple of days to think about this and get back to you, preferably over text, as having this conversation in person sort of threw me off-balance”. So the evening ended with me requesting the no contact rule from Mr F, I didn’t want to confuse nor influence his decision.

After 8 days, Mr F texted me on WhatsApp, saying to let him know when I could talk. I responded and we booked a WhatsApp chatting time for Friday evening when I got home. Yes booked, because, he used to get upset if I took time to respond to his messages. We chatted, I was sad, of course I liked the guy, but he decided that he wasn’t emotionally stable enough to give me want I wanted and didn’t want to let me down like he did his ex. So we un-dated and stopped going on dates. It was weird at first, I would hold my phone and wait for him to accidentally message me, even though I asked him not to, I still religiously scrolled through his WhatsApp, read old chats, zoomed in on new profile pictures but managed to avoid messaging him. After a while, I got over it.

So recently, I moved to the island and ran into Mr F at a car wash. At first it was a bit strange but then I remembered he lives in Osborne estate which isn’t so far. Anyway, since our ‘chance’ meeting, Mr F has  suddenly become interested, and has been calling and texting me every day like old times.

I liked this dude and as you can tell I was upset when he gave me that ‘line’ , the kind of line you give to someone you have assigned to the friendzone.I felt like he led me on and then backed out but I  am sorta curious to know much more about him…I don’t think Miss Gidi would be in support of this one.

So my people, ImaRose needs your advice oh, what would you do?

WELCOME TO THE MONTH OF JULY!!!!! The month of fabulosity and greatness because it is my birthday month!!! yayyy!!!

I’m not going to tell you what day of the month it is but I will tell you that it falls on a Tuesday so I will be celebrating every Tuesday till July is over and as  part of my celebration, I have decided to give 5 lucky winners a chance to get a gift from me (I’m obviously too nice). The gifts are:

Pretty cool gifts if I may say so myself BUT does this mean I get nothing in return? Ummm NO!, it means you get to give me the best birthday gift by doing the following:

By doing the above, you will automatically get a chance to win one of the gifts listed above for you or for a friend. Here are some additional guidelines

Guys, I admit the gifts are more for the ladies but you are free to join the fun and win the gift for a lady in your life (mother, sister, wife, girlfriend, sidechic).